The silent heroes of Indian Army What motivates a soldier to plunge headlong into extreme danger, staking his very life for the sake of regimental pride and honour, while defending the nation?  He is buoyed by the knowledge and belief that he can count on his regimental medical officer (RMO) to take care of him, should he sustain injuries. The very sight of a young captain or major with a red-cross armband, tending to casualties amid the overwhelming chaos of war, is known to have a salutary effect on the wounded men. War veterans vouch for the miraculous revival of some of those on the verge of death!  Even otherwise, his presence is critical to the morale of the men on the battlefield. Yet no news channel, print media, prime time show or book ever highlights his contribution, role or acts of valour.

“The popular image of a war hero is that of a rifle or machine gun wielding infantry soldier or a tank man or a fighter pilot. A gentle physician with a stethoscope or a surgeon with a scalpel doesn’t exactly fit in as a war hero in the general perception,” observes Capt DP Ramachandran, an Armoured Corps veteran. “No wonder then,” he adds, “that many awe-inspiring feats of courage under fire by a galaxy of officers and men from the Army Medical Corps remain largely unknown.” Being human, the RMO may falter at times and face censure or criticism, sometimes unfairly, which the tank man describes as “an affliction common to the officer corps of all armies.” He has brought to light many significant details about medical officers, buried in official archives, with the passion of a scholar-historian.

The RMO is a soldier habituated to long route marches, firing practice, battle inoculation exercises, mountain climbing and hardships like everybody else in the unit. Some have doubled up as company commanders during the 1962 Sino-Indian war and later. Many MOs chose to minister to the casualties, unmindful of grave personal risks, even after their formations withdrew in disarray, leaving them to fend for themselves. For instance, Capt Raja Amrithalingam and his medical unit refused to abandon casualties in the face of mortal dangers, even resisting the Chinese hordes with Lee Enfield rifles and submachine guns, until they were overrun. He sustained injuries and was presumed dead, but survived and served wounded Indian and Chinese soldiers as a PoW. Another RMO, a captain with a Dogra unit, reportedly saved over 70 lives in 1971, under repeated enemy attacks and artillery bombardment in a mountainous terrain. 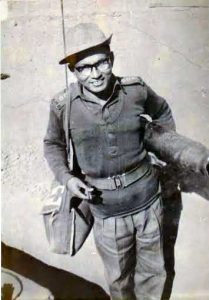 More recently a major and the RMO of Sonam post in Siachen, the second highest on the glacier took over as the company commander, when his counterpart from the infantry proceeded on a long leave. Given the fact that the temperatures in Siachen hover between 30 to 50 degrees below zero, every second spent on the icy barrenness is the ultimate test of human fortitude and endurance, rarely experienced on any other terrain.  The sheer psychological stress of being isolated on those unforgiving heights, cut off from family and civilisation for months, where each minute seems like an hour, does become unbearable at times. Yet soldiers have learnt to live with it, with vastly improved survivability in such extremes, because of the sustained efforts and dedication of the medical officers serving there.

These are just among the many odds that the RMO may have to face in the line of duty. For instance, late Major Sukumar Talukdar, the medical officer of 2/5 Gorkha Rifles (FF) before, during and after the 1965 war, tended to casualties amid hours of heavy shelling and small arms fire, saving many lives, in the decisive Battle of Charwa and later—his very first exposure to war and its horrors. In a stirring first person account of the ensuing battles in Sialkot Sector and its aftermath, which runs into 16 dog eared and yellowing foolscap sheets, Major Talukdar confesses going through “a very tough and difficult time in handling and managing the stretcher bearers. . . . They were not psychologically attuned to the tasks given to them,” he writes, even though they were no raw hands, but tough infantrymen themselves!  Significantly, 2/5 GR is one of the Indian Army’s most decorated units, with the highest tally of three Victoria Crosses and is the recipient of Battle Honours Charwa.

The conditions on the battlefield compounded his task. “The evacuation and treatment of casualties at dark nights,” Major Talukdar points out, “became very difficult because of absence of lighting. Vehicles could not be taken over the site because of operational reasons. Casualties were held up at the Regimental Aid Post (RAP) till the first light.” Being extremely particular about the treatment of casualties in dark nights, in a bid to minimize suffering and loss of lives, Major Talukdar also proposed the use of choppers for the immediate evacuation of the critically injured, for a better follow up at the base hospitals. His submission might have sounded quite radical at that time but has since been followed. He also insisted that RMOs grasp the fundamentals of tactics to enable them to appreciate the course of battle and make suitable plans for the collection, treatment and evacuation of casualties.

Capt  Ramachandran vouches for the travails faced by medical officers, based on his own first hand experiences as a squadron commander of tanks during the 1971 war. “If they had such a tough time during ’71 (doctors hardly found time to take some rest),” he writes, “when we had all the time to prepare, I can well-imagine the stress under which they would have functioned in ’65 which was a war thrust on us more or less suddenly. Yes, I do feel we need to expand the medical back-up a whole lot more during operations.” He has also highlighted numerous gallantry awards won by the Medical officers (MOs) who brought laurels to the country.

For instance, Lt Col AG Rangaraj commanded the 60 Para Field Ambulance, raised in August 1942, Secundrabad, which rendered yeoman service during the Korean War in the 1950s.  He has been decorated with the Maha Vir Chakra (MVC), along with three other MOs, namely Major (later Lt Gen) A.K. Barat, Major N.B. Banerjea, and Captain Pratap Singh (posthumous).

Rangaraj is the only MO to have taught operations of war and tactics at the Defence Services Staff College, Wellington, according to Capt Ramachandran. His unit accounted for two MVCs, including one won by Col Rangaraj, six Vir Chakras (VrCs) and a Bar to VrC, besides 25-Mention in Dispatches. AMC personnel have notched up a tally of more than a dozen Vir Chakras since Independence. Can one overlook the sacrifices of Major Laishram Jyotin Singh, the Manipur born young medical officer who, supremely unmindful of his personal safety,  died fighting heavily armed terrorists, foiling their attack on the Indian Embassy in Kabul, on February 26, 2010. He won the Ashok Chakra, the nation’s highest peace time gallantry award, posthumously, bringing glory to the Indian Army in general and AMC in particular.

Just before the beginning of the Sino-Indian war, Lt Gen BM Kaul’s extremely short sighted decisions also jeopardised medical arrangements for troops deployed in Namka Chu, which Brig JP Dalvi in the ‘Himalayan Blunder,’ describes as “ill thought moves.” For instance, in early October, Kaul, overlooking basic norms, shifted the Mobile Surgical Team from a place called Lumpu to Bridge 1, close to an RAP above 9,000 feet. The move, according to Brig Dalvi, was fraught with highly damaging consequences. Locating a surgical team away from a field ambulance unit is a self-defeating exercise, not only because it practically deprives patients of post-operative care, provided by the latter, but in this case also exposed them to much greater risks, as the RAP lay directly in the line of enemy fire.

According to Brig Dalvi, a capable and upright officer like Col Maitra, Assistant Director of Medical Services, Headquarters 4 Division, stepped in boldly to reverse Kaul’s decision and salvage the situation by posting the Surgical Team close to a field ambulance unit at Ziminthaung, on a lower elevation, just a couple of days before the Chinese attack! Surgery could not be risked at altitudes of 9000 feet or higher without proper oxygenation. Col Maitra had acted on an urgent signal sent by Major Jayaraman, the surgeon, to the effect that it was well nigh impossible to treat casualties there.